A Lion at the heart of Chanel 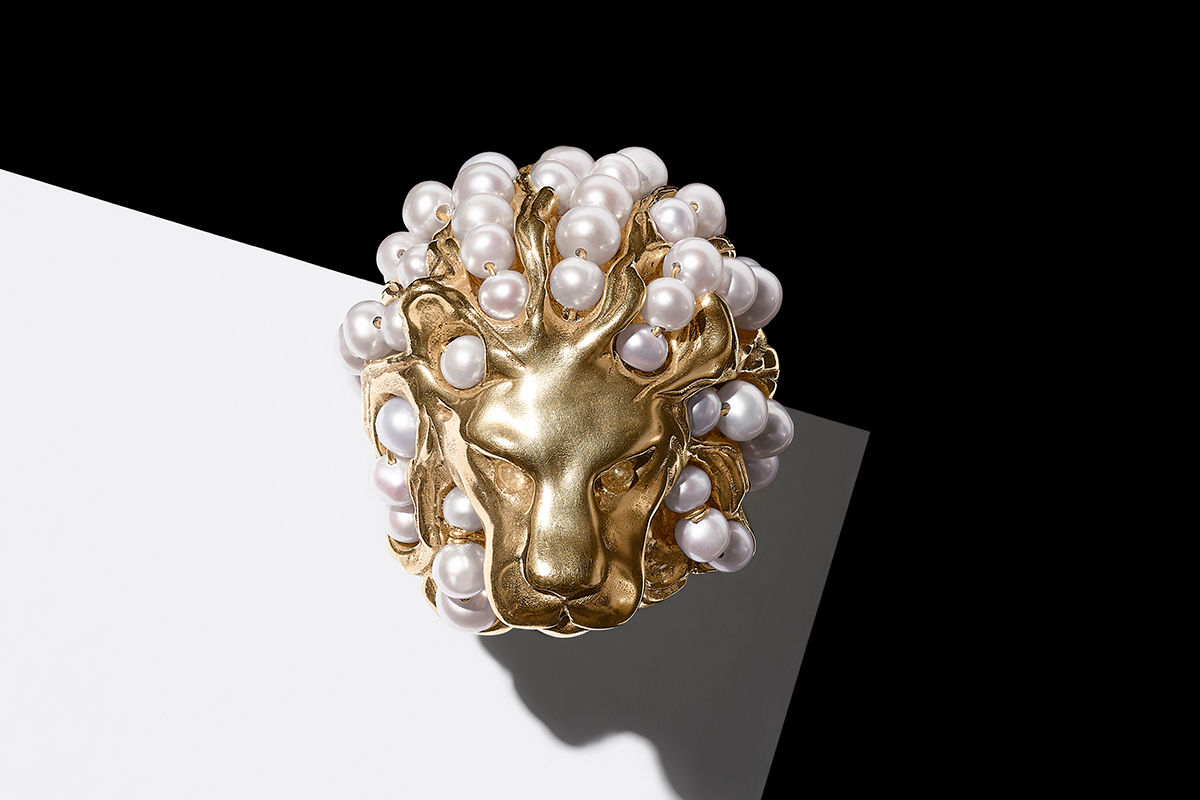 At full length, Nelson Mandela is slightly taller than his owner the jewellery artist Harumi Klossowska de Rola, whose dominative frame belies her fierce talent. De Rola walks Mandela, her two-year-old Serval cat on a lead every evening around her picturesque village in Switzerland but her feline fascination started long ago in childhood.   She inherited an admiration for cats from her father, the French painter Balthus, bringing home strays despite the misgivings of her mother Japanese artist Setsuko. She finds their mysterious, independent yet loving behaviour beguiling and they have dominated her life’s work.

Her interest in jewellery ignited aged seven when her parents took her to stay at the extravagant home of gallerist Claude Bernard in Paris where she became transfixed by his extensive collection of semi-precious stones, including rock crystal that she would later work in.   That experience combined with visits to her stepmother’s impressive Giacometti sculptures pulled her away from an early ambition to be a veterinarian and towards her true calling of becoming an artist.

She found herself more interested in sculpture than painting, mixing her love of animals and nature with raw materials such as bronze with alabaster for her stand alone pieces and cow horn or wood with gold and gemstones for her wearable art. Her first jewel was born in 2010 when she made a snakehead skull in white gold and then a set of rings a few years later featuring big cats inspired by a present from her husband of a stuffed Puma. “There is something in their eyes”, she says, “The expression of not being completely domesticated, of still being wild”. And she expresses that wildness magnificently.

Then one Christmas after a visit from her flamboyant sister in law the fashion muse Loulou de la Falaise, an introduction to the design house Goossens was arranged. De La Falaise knew they both shared a passion for handmade objects and a collaboration was soon in the works that is still on going. To De Rola joining forces with Goossens felt like joining a family and that feeling of intimacy is one of the reasons CHANEL’s métiers d’art continues to be so successful. She plunged into the Goossens creative universe headfirst and found the biggest adjustment being an amplification of texture followed by abstraction. “It’s a bit like dating.” She says ruefully. “It takes time to get to know each other.” Collaboration has its advantages though. She feels more able to let go than in her own work, to be less controlling and obsessive.

De Rola looks to the big cats of ancient Egypt, Roman history and Netsuke, the Japanese art of small talismanic sculpture for inspiration. Her collectors are just as likely to display as to wear her work because her jewels don’t need to be on a person to come alive. They are alive. Her first Goossens collection included fat, succulent pomegranates, pregnant with garnets in gilded bronze and sculpted mistletoe with milky rock crystal buds. It was a sublime combination.   The second and latest collection sees lions and snakes, some peppered with pearls and presented by Goossens in their new London atelier at The Burlington Arcade which opened in April. ‘People love fashion (in London) says managing director Gwenaëlle Crehalet. “They dare to wear statement pieces, therefore our jewellery is a perfect match.”

Twenty nine square-metres of opulent space bustling with jewels, mirrors, wall lights and even a chandelier compete for attention at the boutique, with naturalistic themes present throughout. Gabrielle Chanel’s apartment on the Rue Cambon in Paris with its flamboyant, sculpted wheat furniture might be the blueprint in terms of interiors but it was her love of big cats, rock crystal and avant-garde design that is behind the jewellery magic we see today.

In 1953 brilliant young goldsmith Robert Goossens received an intriguing telegram and in his best couture blazer he paid a visit to Chanel’s famous apartment. That was the start of a daily rendezvous at 5pm with the designer and together they broke the established codes of jewellery design, injecting a powerful Byzantine spirit until her death in 1971. Robert was distraught. “There was something passionate and particular about their relationship,” asserts Patrick Goossens, his son and Director of Heritage and Savoir-Faire. They inspired each other.

Goossens father and son worked with each other for thirty-five years and in that time cultivated a design philosophy centring on beauty, comfort and craftsmanship. Patrick rather unsurprisingly has four cats himself called Frippouille, Titi, Fifi and Flash, making him a card carrying member of the ailurophile club. Now that De Rola and her lions have joined the family, her raw, artistic energy with its organic proportions is again evolving its DNA. “Goossens is a way of thinking, rather than a style,” Patrick says thoughtfully. “It’s a feeling.” And the cats would almost certainly agree.

Written by Melanie Grant for Vanity Fair on 5th July 2021.