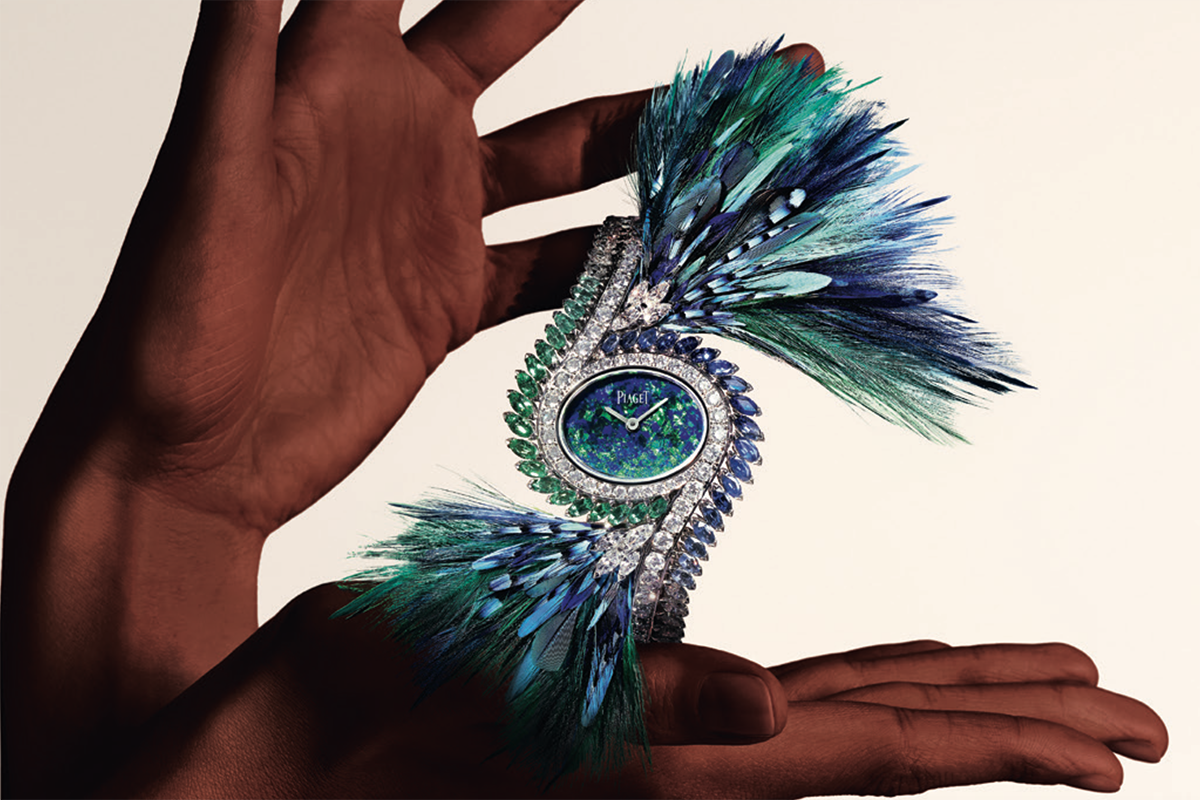 The King of Surrealism, Salvador Dali with his thinly waxed moustache and penetrating eyes was a strange man known for the bouts of wild eccentricity that surfaced spectacularly in his paintings.  Now and again though he rather sensibly liked to experiment in other mediums and in 1967 he ventured into the world of jewellery with Piaget, a luxury brand from Switzerland.  He allowed them to use a selection of gold coins inscribed with his own stylised portrait and that of his wife he had minted himself in a series of double-sided pendants, rings and watches.  Some also featured eggs and laurel leaves but all were dream-like and beautiful, symbolising a new jewellery era for Piaget as they stood on the precipice of the 1970’s – the most important decade in their design history.  Before this they were primarily known as a watch brand and although watches may have been their birthright, jewellery would become their glittering heart and soul.

“Piaget has always been a living Patrimony”, exclaims its exuberant new CEO Benjamin Comar.  As an entity it has existed completely in the moment, not looking back with a Werther’s Original glow that so many heritage brands take comfort in, not making figurative work and definitely not trying to be super trendy. “We are elegant, extravagant and joyful and we offer a taste of happiness” explains Comar, describing the spirit of the brand. Comar’s biggest challenge since taking the reins last year has been to find a ‘common tone of voice’, to establish aesthetic codes and unity between all produce lines past and present so that fireworks are felt in all the right ways.

The 1970’s laid the foundations and represented a period of freedom for Piaget and for the whole world as society shifted toward greater social equality and a style was born so bold that luxury as a concept experienced a seismic shift. Piaget’s creative psychology has never been the same since.  Becoming an international brand in the 70’s enabled their jewellery to expand creatively and geographically so it’s no coincidence that Comar’s favourite piece from the archives is a necklace watch called Montre Sautoir made in 1971 featuring textured gold and lapis lazuli.  Powered by their famous ultra-thin 9P hand-wound movement, it is a magnificent example of the duality of their creative universe.

This June sees the launch of Solstice, their new high jewellery collection dedicated to the longest night of the year with it’s fire opals and blue black feathers but it’s plain to see that that a 70’s style flamboyance continues to ricochet between the walls of their design studio. Titanium, an industrial material newly introduced by them last year in the Extraordinary Lights collection also pops up in Solstice as a watch that transforms into a pair of earrings. This is a collection that can take you from glitzy daytime glamour to sultry evening pleasures without breaking a sweat. “For me this collection is just extraordinary, “ says Stéphanie Sivrière, Director of Design. “There is a most beautiful collaboration between all the craftsmen who make our Métiers d’Art.” Surprisingly Sivrière didn’t come from a design background but she conducts this symphony of elemental forces with grace and style. Under her care, their jewellery continues to inspire.

Despite all this bejewelled high-jinx, jewellery has been a relatively slow burn for Piaget.  The house began life as a watch manufacturer in a picturesque village amidst the snowy peaks of the Jura mountains in 1874 selling watch movements to other people.  In 1957 it decided to only work in precious metals, fashioning itself into a luxury brand offering its own timepieces which were so slim, volume could be added with a cacophony of colour saturated gemstones on and inside the cases.  Gemstone dials combining jewellery and horology to stunning effect were created in the midnight blues of Lapis Lazuli and turquoise the colour of heaven.  Serious, megawatt jewellery slowly evolved from these early gem-set watches, emanating from three Geneva based workshops the brand acquired between 1961 – 1972 and becoming an artistic expression in its own right.  Dali’s contribution was simply the cherry on top.

Oh but what a cherry.  Back in 1967 and at the tender age of twenty-five, Yves Piaget launched what turned out to be a magnificent collection of Dali d’Or watches and jewellery at the Hôtel Meurice in Paris.  Dali who was present and as flamboyant as ever demanded a transparent chair on the eve of the press conference so he could be dramatically unveiled as if on a throne.  Panic ensued.  The next morning and a few moments before the curtain went up an inflatable plastic chair was thrust onto the stage and Dali perched, pet ocelot on a leash in one hand, Dali d’Or in the other as if floating.  He was silent for what seemed like an eternity staring into the audience.  The tension was palpable.  Shortly afterwards when he agreed to be photographed, Dali d’Or coin pressed to his eye like a monocle, clutching a gold tipped walking stick there was no doubt that Piaget’s company motto ‘always do better than necessary’ had been accomplished.

Written by Melanie Grant for Vanity Fair on Jewelry July/August 2022.