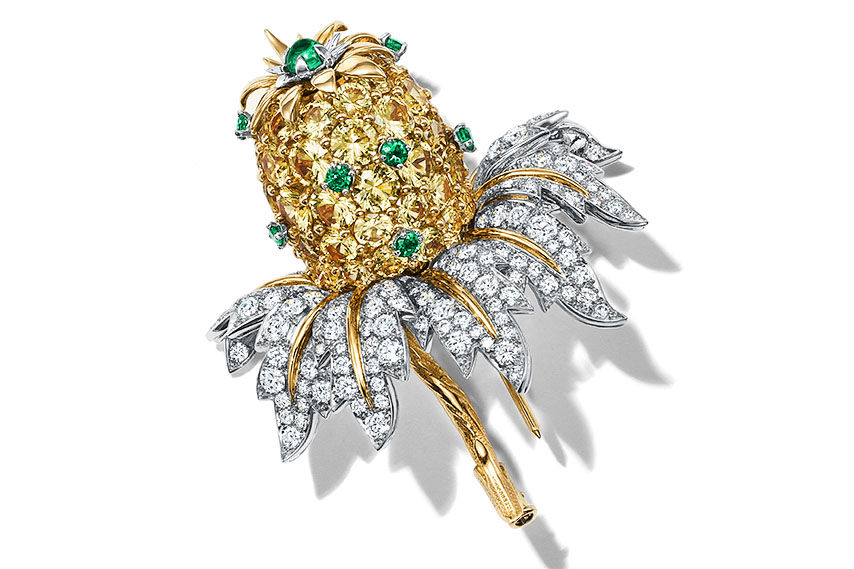 On a sultry afternoon in Mexico, the rakish actor Richard Burton was busy seducing his leading lady on the set of the Tennessee Williams play, The Night of the Iguana. It was 1963 and Burton’s charms were being scrutinised from the sidelines by his new lover Elizabeth Taylor – who herself had fallen not long before while they, both married were on the set of Cleopatra.

Schlumberger was a pioneer who created a fantasy world of mythical sea creatures, trifid-style flowers and idiosyncratic birds perched atop enormous diamonds. Tiffany hired him in 1956 after America’s Great Depression, and the death of Louis Comfort Tiffany, had seen sales of jewellery dwindle. It was a bold move and he had complete creative freedom. So spectacular and enduring were his designs that Reed Krakoff, Chief Artistic Officer for Tiffany has elected to re-imagine a high jewellery collection in his honour, entitled The Legendary Designs of Jean Schlumberger.

Yet Schlumberger’s journey from the flea markets of Paris to the glittering lights of Fifth Avenue was, at times, a perilous one. Born in Alsace, France, to a wealthy family in the textile trade, he was sent to Berlin to become a banker but instead moved to Paris where a pair of earrings he made for the Duchess of Kent caught the eye of fashion designer Elsa Schiaparelli. She hired him to make stylised buttons and costume jewellery, but World War Two broke out and, after miraculously surviving the battle of Dunkirk, Schlumberger opened a small store in New York.

The heiress and garden designer Bunny Mellon wandered in one day and fell in love with his work, becoming his biggest patron and introducing him to a world of unparalleled glamour. The ‘swans’, as Truman Capote called them, owned New York in the 1950s: First Lady Jacqueline Kennedy acquired a pair of blue and white enamel bangles the press called ‘Jackie’s bracelets’, and refused to take them off. Style icon Babe Paley did ‘high and low’ before it was even a thing, combining Schlumberger’s designs withcostume jewellery.

Actress Audrey Hepburn wore the famous yellow Tiffany dia­mond, which was a whopper at 128.54 carats, bound in a ribbon of gold and diamonds of his design after shooting the opening sequence of Breakfast at Tiffany’s while legendary magazine editor Diana Vreeland reputedly kepther Schlumberger Trophée de Vaillance brooch on her bedside table, no doubt so she could revel in its beauty during the night.

These were exceptional women and Schlumberger combined their taste with his talent to create some­thing magical. ‘Schlumberger was a master,’ says Frank Everett, Sales Director of jewellery at Sotheby’s New York. ‘He was whimsical without being cartoonish.’ Krakoff has combined his own modernist style with Schlumberger’s avant-garde surre­alism to dramatic effect. Morning Glory, the centrepiece of this 30-strong collection, features pink sapphires for the first time on hanging blooms suspended from golden vines.

Sea Anemone is encrusted with green tsavorites and blue sapphires and looks as if Schlumberger himself dreamt it up from his summer home in Guadeloupe. The Epine starfish brooch, with its spears of turquoise and interlocking diamonds, uses abstraction to bring the collection into the modern age. ‘We consider how clients are wearing and styling jewellery and try to envisage a mood, a point of view, an emo­tional response,’ Krakoff says. ‘How someone will live with the jewel rather than just how it works.’

Applying form over function prioritises the art – a school of thought to which Tiffany has long subscribed. Schlumberger avoided big diamonds because he felt their value pushed the art into second place. ‘You might as well wear a cheque on your lapel,’ he said. Bunny Mellon collected his pieces as an extension of her pas­sion for French art. She enjoyed the gardens of Degas, Monet and Van Gogh on canvas and his surrealist flora and fauna in gold. He layered paillonné enamel over gold foilas an artist might use sensuous colour to paint a masterpiece. His legacy of bejewelled Surrealism captivated postwar America so completely that even Elizabeth Taylor could not resist.

Images A bejewelled flower from the new collection, courtesy of Tiffany & Co.