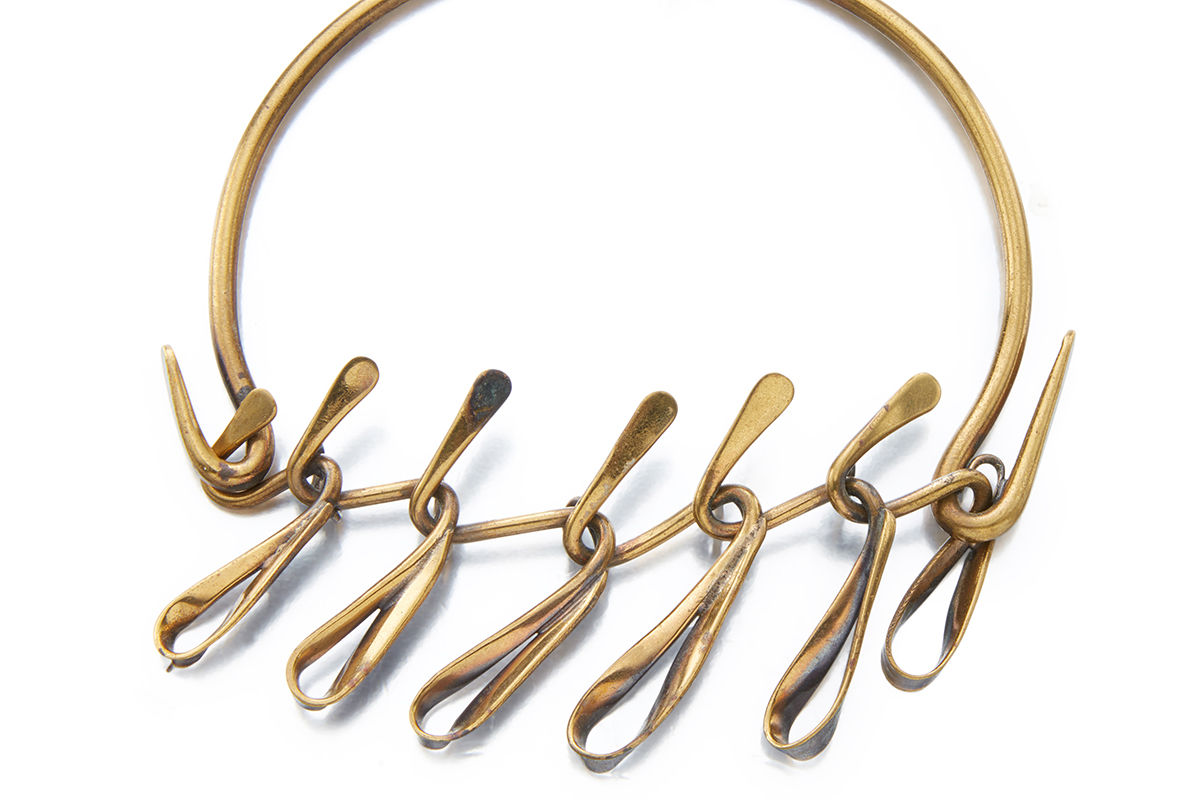 When Lorraine West told her mother about a new exhibition celebrating the work of Black jewelers, she burst into tears over the phone.  West, a jeweler for more than 20 years, said she doesn’t normally “get emotional” when it comes to her professional achievements, which include seeing celebrities like Beyoncé and Zendaya wearing her designs. But her inclusion in the groundbreaking show “made me cry,” she recalled.

“I wasn’t expecting it,” she said over email. “I allowed myself to feel it and release the tears of joy and gratitude.”  Known for elegant gold statement pieces that favor sophisticated settings over large stones, West said she was inspired to start designing after playing with her mother’s jewelry as a child. Now, she is one of 21 Black jewelers showcasing and selling their work at “Brilliant & Black: A Jewelry Renaissance.”

The exhibition’s curator, writer and jewelry expert Melanie Grant, said she believes this is the first time a major auction house has spotlighted “pioneering Black jewelry design.”  Open this week at Sotheby’s New York, the show features not only contemporary designers but overlooked African American jewelers dating back to the 1950s. Works by Winifred Mason, believed to be the first ever commercial African American jeweler in the United States, are showcased alongside those of her later apprentice Art Smith, a mid-century designer known for his modernist bronze works.

Calling him a “founding father” of Black jewelry design, Grant said Smith’s brilliance went unappreciated at the time. “It was quite important for me to put a couple (of historic jewelers) in context (with) the modern designers. Without them, we would be in a different place.”

Ancestry and family ties run deep through the exhibition, with jeweler Johnel Jamison also attributing his start in the industry to his mother. The rapper turned jewelry designer wanted to bring a sense of “kingmanship” to his stage performances, so, before he set off for a European tour, his mother helped him create a wire wrap ring using a large black tourmaline stone that had once sat on their family mantelpiece.

The ring proved a hit among his contemporaries, inspiring Jamison to create his own line. When he returned from tour, his mother continued teaching him to make rings. Years on, she remains his “consultant,” and his signature golden pieces are now worn by the likes of Formula One driver Lewis Hamilton and football player Colin Kaepernick. He’s also been commissioned to create designs for Oscar-nominated actress Cynthia Erivo and fashion designer Kerby Jean-Raymond, creative director of Pyer Moss, for whom he has created custom pieces for the Met Gala and New York Fashion Week.

For Jamison, who founded Johnny Nelson Jewelry in New York, the craft is deeply tied to Black culture — especially to the music industry where, he said, jewelry is viewed as a “sign of wealth.” He added, “It’s a sign we made it, like I’m breaking from poverty.”

Other designers featured in Sotheby’s selection chose to pay homage to their African roots. British brand Vanleles, for example, is showcasing floral earrings inspired by the motifs in traditional West African batiks; while designer Satta Matturi has created a selection of earrings inspired by traditional West African wooden masks — a recurring symbol among her brand’s designs, which have been worn by the likes of Rihanna and Priyanka Chopra-Jonas.

“I feel like we have to honor our ancestors, because these are the people that made it possible for us to do what we’re doing today,” he said.A

While curating the exhibition and sale, Grant said she wanted to expand the perception of Black jewelers by honoring not only those paying tribute to African culture, but those who break away from tradition and innovate.

“Some are really into (African-inspired design) and some aren’t,” she said. “I think we have to give people the space to do what they want to do. Sometimes being Black is enough.”

While the sale focuses on successful high-end designers, Grant acknowledges that up-and-coming Black creatives face disadvantage and discrimination in the jewelry business. Reaching the industry’s upper echelons can be “so expensive,” she said, adding that getting “the big stones” requires “connections.”

A 2020 study commissioned by Jewelers of America and National Jeweler magazine found that only 8.2% of US jewelry industry employees — and just 2.8% of employers — were Black or African American. That same year, a UK survey, by jeweler Kassandra Lauren Gordon and craft organization the Goldsmiths Company, found that over half of Black British jewelers had experienced racism in the industry.

The lack of representation is deeply engrained, according to Jamison. Unlike White and Asian jewelers, “we don’t own fashion houses and we don’t have generations of manufacturers in our family,” he said, adding: “We have to do (what we can) to build the generational wealth within this industry.”

To overcome this, Black jewelers often share resources with one another, Jamison said, citing fellow creatives like Maggi Simpkins and Mateo New York founder Matthew Harris. “These are all people that had to work a little (harder) to get the same resources that their White counterparts have.”

But the fact remains, he added, that not many young Black creatives see jewelry design as a viable career option: “That’s not really in our scope. We’re taught to be the consumers and not the producers.”

A number of initiatives have been launched in recent years to help young Black designers get their start in the jewelry industry. The Art Smith Memorial Scholarship Fund, named in honor of the aforementioned pioneer, sees 50 jewelry brands supporting scholarships at the Fashion Institute of Technology and industry mentorships. The recent resurgence of the Black Lives Matter movement also led to increased attention on Black jewelers, Jamison said, though that visibility does not necessarily translate into commercial gains.

“Don’t just wait until there’s a big Black Lives Matter movement,” he said, adding that he hopes “compassion for Black lives wasn’t temporary.  “Now we’re going to just talk about all the Black jewelers, but then not use any of the resources you have to actually get us into stores so we could create consistent income.”

West echoed the sentiment with her message to luxury buyers and the jewelry business at large: “Highlight us in the most equitable ways possible. Seek us out, which would mean the industry itself would have to share its platform.”

“Brilliant & Black: A Jewelry Renaissance” is on until Sept. 26 at Sotheby’s New York.