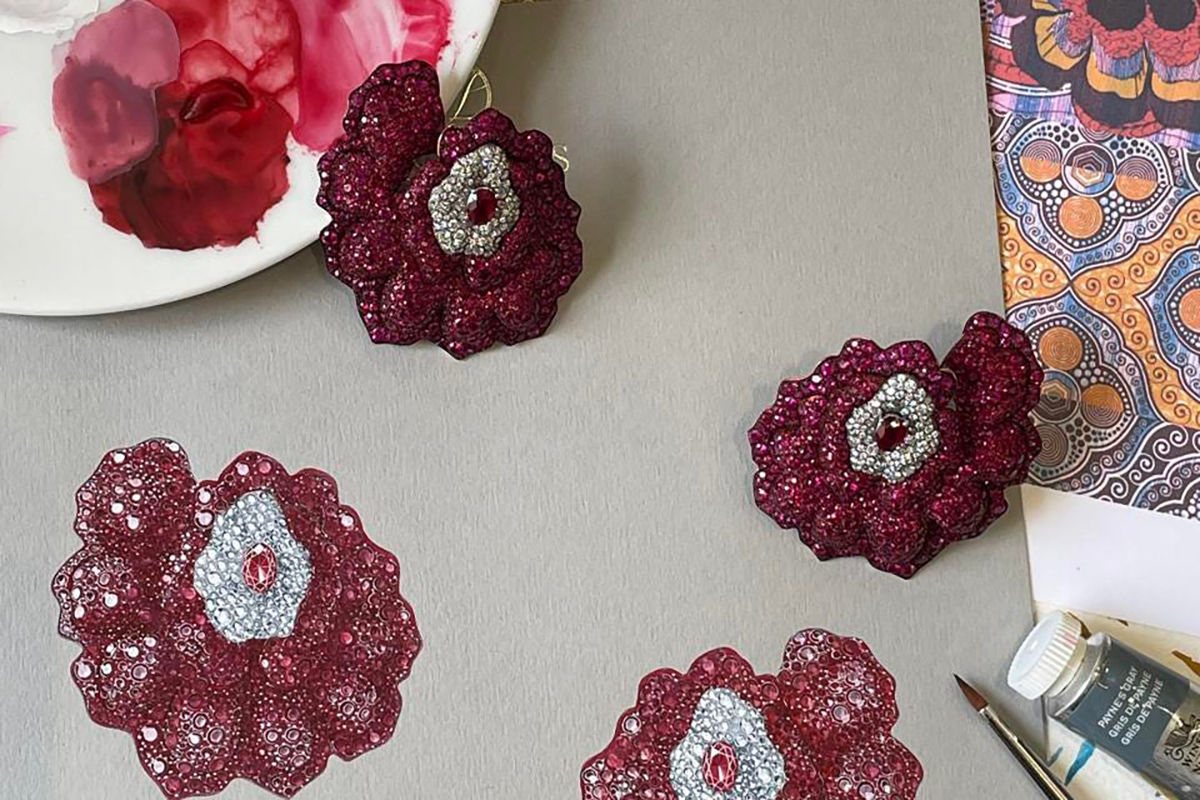 Sotheby’s New York has teamed up with jewelry editor and author Melanie Grant for its first-ever selling exhibition dedicated to Black contemporary jewelry designers. Opening September 17, the show will feature 60 magnificent pieces by 21 US and European designers from the 1950s to the present day, in an event that has been described as a watershed moment for both Black creatives, and the wider jewelry industry.

It was while researching her book Coveted: Art and Innovation in High Jewelry that Grant realized that there were no Black designers selling at auction. “[They] tend to get lodged in the commercial space between fashion and fine jewelry. The money needed to create art on a grand scale and then to access a global collector base is beyond reach,” she explains in her foreword to the auction catalog. Added to that, contemporary jewelry rarely comes up at auction for the simple reason that it is still in circulation and worn regularly.

“Auctions are the public face of the market,” she writes, “a barometer of taste and trends.” Black creatives were missing out on exposure to a prestigious global audience of buyers and collectors, and Black students had no aspiration inspiration for a career in high jewelry. So Grant took her idea for an exhibition focusing on Black talent to Frank Everett, Sotheby’s Director of Jewelry, who accepted with enthusiasm: “it’s an honor for Sotheby’s that they all took the opportunity to create new work,’ he tells me. ‘We’re so proud of this show.”

Cue a slew of “powerhouse gems on my desk” from contemporary black designers who had made or customized pieces for the exhibition. Jewels like Vanleles’ extraordinary Enchanted Garden earrings, inspired by African batik and crafted from feather-light titanium and rose gold, set with African rubies; or Maggi Simpkins’ custom 2.5 carat pink diamond ring featuring her trademark floral inspiration and setting wizardry. Simpkins’ ring is priced at $1 million and if it sells next month, it could be the first time a Black design brand has broken the million-dollar barrier in the sale room.

Would it have been possible for Sotheby’s to stage such a show 18 months ago? “It could have and it should have. I am surprised it hasn’t happened yet,” says Everett. Grant was also surprised that it hadn’t been done before, but notes the “seismic shift in the perception of Black talent” during the past year: “we sought it out and celebrated it to an extent not seen in my lifetime, which paved the way for the exhibition,” she says, “I don’t think it could have happened on this scale before. Everything feels different now.”

She believes the industry has reached a tipping point for Black creatives, and that we are entering a jewelry design renaissance not dissimilar to the post-war creativity of the 1920s, powered by the momentum of the Black Lives Matter movement and the challenges of the pandemic. Certainly, the social justice movement that began last summer resulted in a flourish of grants like the Art Smith Memorial Scholarship Fund, and industry-wide initiatives to support Black talent. In the UK, the Kassandra Lauren Gordon-Goldsmiths survey of BIPOC creatives set out a roadmap for the future, which included recommendations to encourage representation and support at all levels.

In the face of such momentum, Grant was concerned with how collaboration across the industry could help to move things forwards, and to affect real change, household names like Sotheby’s had to be onboard. Almasika designer and art collector Catherine Sarr believes the involvement of the auction house “truly exalts the work of this group of designers. There can be a tendency to distinguish jewelry design from high art, but this setting only confirms [that] much like traditional arts, each jewelry designer has a story to tell and an audience with whom they want to connect.”

The game-changing nature of the event is not lost on the designers themselves: “I have very few moments in my life that I can recollect so vividly as when I got the call from Melanie Grant telling me about this incredible exhibition. I knew that my world was about to open up in ways I couldn’t yet fathom,” says London-based Bermudan designer-maker Melanie Eddy, whose architectural bangles in the show draw on the Bermudan tradition of giving bangles as gifts. “Melanie created this opportunity. She chose to highlight and showcase us to the world, it’s deeply meaningful.”

Angie Marei, who designed a Tahitian black pearl, garnet and black gold ring for Marei New York, describes it as “an absolute honor to be selected for this monumental exhibition. I am half Egyptian and Dominican, my culturally diverse background inspired my unique aesthetic and I want to create a legacy that will be around once I am gone.”

It’s this kind of representation that is most important for Karen Smith, founder of the Oakland-based We Wield the Hammer metalsmith training program for woman and girls of African descent: “we have come to understand that if we can see it, we can dream it. And if we can dream it, we can be it. For generations, we have produced extraordinary work without the attendant recognition… Young black designers [will] get to see beautiful craftsmanship emerge from people who look like them, get to dream mastery because they can see mastery. What a triumph indeed.”

“We want Black kids to aspire to being jewelers,” designer Thelma West told Sotheby’s Instagram Live on Friday, and whose pear-cut diamond, gold and ceramic Rebel Black ring is fast becoming a stand-out for the show. The power of young Black students seeing talented Black designers selling million-dollar jewelry at Sotheby’s should not be underestimated. Nor should the power of “collaboration to affect change creatively,” as Grant puts it; or, how one woman with a bold idea can stage a change-making moment with one of the world’s biggest auction houses, to inspire Black creatives around the world.

Brilliant & Black: A Jewelry Renaissance will run September 17 – October 10. Pieces will be on show to the public at Sotheby’s New York until September 26, and can be purchased in-person or online via Sotheby’s until October 10.