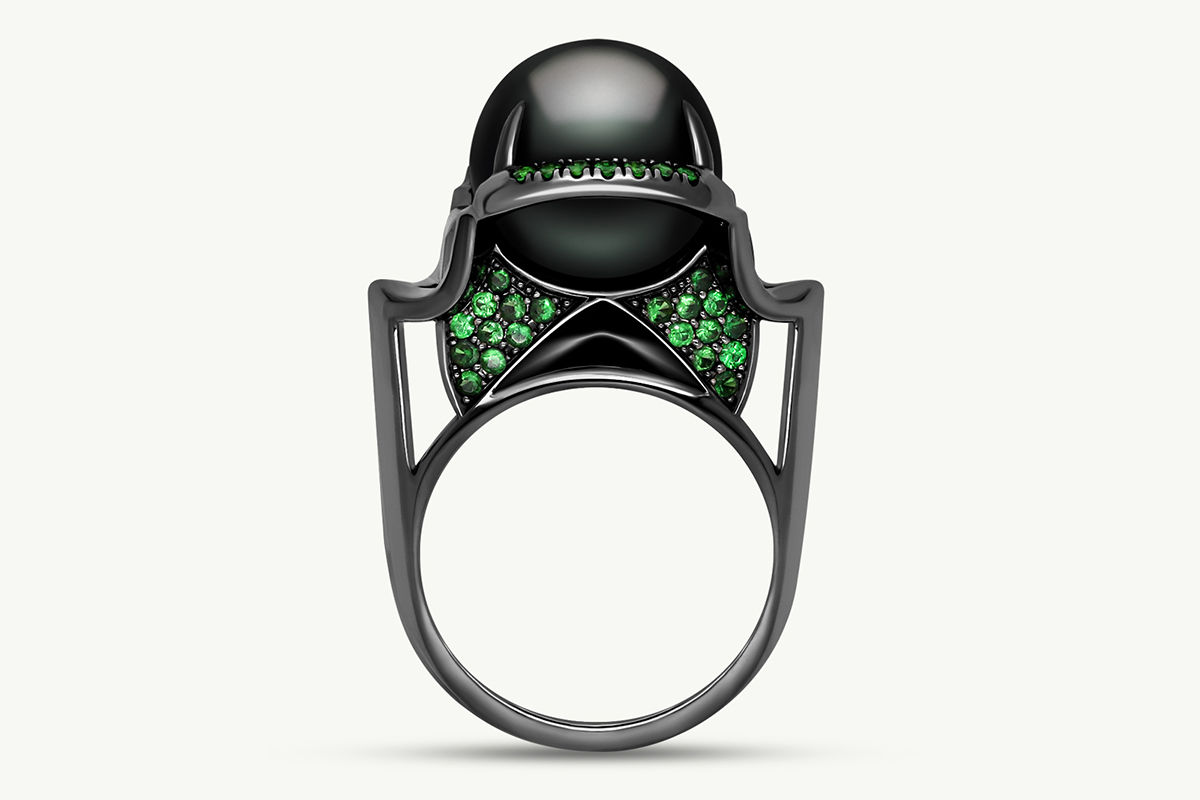 On September 17, Sotheby’s premiered the first exhibition exclusively featuring black jewellery designers, followed by a sale that runs in person and online until October 10.

The sale will be a watershed – and many would say long-overdue – moment for the industry, elevating 21 black jewellery designers to a global stage for the first time.  Brilliant & Black: A Jewelry Renaissance features 63 works, including designers’ signature pieces and custom creations for the exhibition, that showcase their different styles and techniques.

The exhibition is the brainchild of black jewellery author, editor and stylist Melanie Grant, who was galvanised by the Black Lives Matter movement to find a way to make a difference in the jewellery world. Grant has worked at The Economist and its sister publication 1843 for 15 years and wrote the coffee-table book Coveted: Art and Innovation in High Jewelry (2020).Last year, during her conversations with black jewellery designers, many expressed a sense of sadness that despite the social and political changes happening in the world, nothing would change in the jewellery industry. Doors would stay closed, it would be difficult for them to progress financially, and the top level of collectors would remain out of reach.

“There’s an extra level of challenge, I think, especially as a black designer at the high level of the industry,” Grant says in a phone interview. “When you’re a designer in the fashion or fine jewellery space, it’s one thing, but if you’re trying to get into high jewellery, it’s a pretty impenetrable space from the outside.”

The barrier of entry is much lower in fashion jewellery, where pieces are typically made of brass or aluminium and feature synthetic stones instead of precious metals and natural gemstones. Fine jewellery, crafted from 14K or 18K gold and a variety of natural and synthetic gemstones, is where a lot of these black designers operate.

The pinnacle of the jewellery industry is high jewellery. These one-of-a-kind pieces are rendered in 18K gold or platinum and feature massive and ultra-rare natural gemstones. They seldom hit stores. Instead, they’re shown in a rarefied, secret world in private rooms to a brand’s top collectors, or in extravagant parties.

The names of high jewellery houses are old and mainly French, such as Boucheron, Cartier, Piaget, and Van Cleef & Arpels. It’s a very difficult and expensive world to break into regardless of talent, because designing high jewellery requires a lot of capital.

Designers must first purchase these gemstones, which can run from five to six figures for a single stone, and those funds remain tied up until a piece sells. Only the major houses, which are frequently backed by luxury conglomerates, can afford to have millions of dollars of merchandise locked in vaults, awaiting the perfect client.

Grant decided that she would use her reputation and contacts to break open these closed doors and introduce the best black jewellery designers to the world’s top-level jewellery collectors. This access would allow them to flex their creative muscle and design expensive pieces of high jewellery knowing they would be connected with the clients who actually purchase six-figure pieces. And what better way than a dedicated exhibit at one of the most prestigious and powerful auction houses?

She approached Frank Everett, Sotheby’s director of jewellery, initially thinking that Sotheby’s would “laugh me out of the conversation”. But Everett was instantly on board, and they began to mount the first-ever sale dedicated to black jewellery designers. Not only is it the first exhibition of its kind, but it’s also the first time that any of these designers have has their pieces sold at a top auction house, Grant says.

The exhibiting designers include the top black jewellery makers working today, as well as historic jewellers Art Smith and Winifred Mason Chenet. (Chenet is thought to be the first commercial black jeweller in the US. She crafted one-of-a-kind pieces in New York. Smith worked under Chenet before launching his own modernist jewellery collection.)

For Vania Leles, gemologist and founder of London-based high jewellry brand Vanleles, it’s a full-circle moment. Before launching her jewellery collection a decade ago, she worked at Sotheby’s London. While she’s thrilled to be part of the exhibit, she calls the moment bitter-sweet because it has taken this long for black designers’ work to be recognised at this level.

“I think our work and our talent and creativity speaks for itself,” she says. “But it’s the support we have very much needed. It’s a dream come true.”Catherine Sarr, the founder of Almasika, agrees.  “I know that Melanie Grant, the curator, felt a sense of urgency to bring together artists who she thought their aesthetic and vision needed to be discovered by the world,” she says. “It’s really an honour to have my collection among so many talented designers.”

The impact that this exhibit can have on the careers of these designers has already begun.  Superstar Rihanna wore Thelma West Diamond’s Rebel Black Ring on the red carpet at the Met Gala, arguably the most important night in the fashion industry. The ring features a 5.01-carat pear-shaped D-colour diamond and is priced at $400 000 (about R5.9 million).

This article appeared on 23rd September 2021.