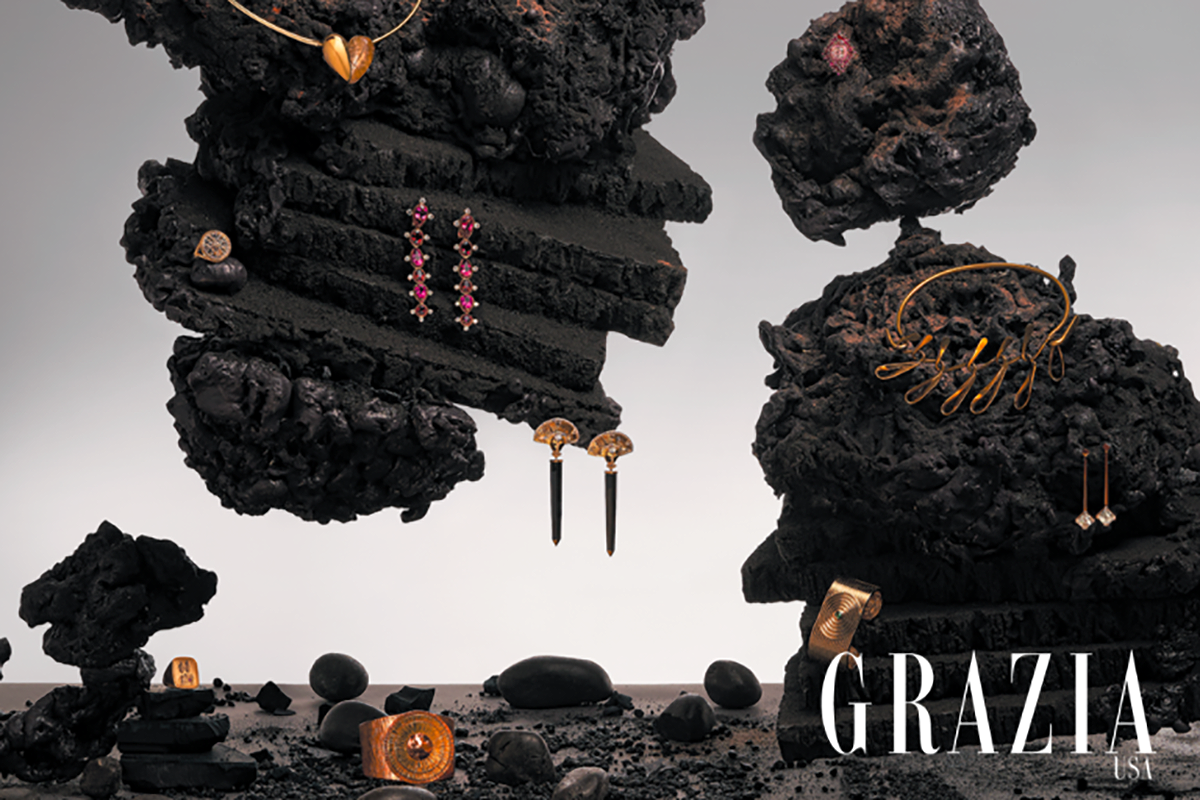 To be young, gifted and black, oh what a lovely precious dream,” croons the high priestess of soul, Nina Simone on her 1970 record, “Young, Gifted and Black.” On that song, Nina was speaking to the beauty of the then “Black is beautiful,” “Say It Loud, I’m Black and I’m Proud” cultural movement—a cultural renaissance, you might say. Throughout history, Black creative communities have been banding together to collectively express themselves through the arts. See: the Harlem Renaissance, the ’60s/’70s Black counterculture movement, the emergence of hip-hop, and so on. According to some, today, we’re currently in the midst of yet another renaissance as it pertains to Black creative prowess.

“In Harlem [New York], there was a massive Renaissance, with Black artisans, singers, dancers, writers, poets, just creatives in general and I think we’re having the same thing now with Black talent on a global scale. I think we’re on the precipice of something extraordinary,” luxury-commerce journalist Melanie Grant tells Grazia USA.

That something extraordinary well might be a wonderful new exhibition and accompanying auction showcasing the brilliance and beauty of jewelry by Black jewelers. This fall, Sotheby’s presents “Brillant & Black: A Jewelry Renaissance,” a display of more than 60 dazzling pieces, featuring the work of 21 of the world’s leading Black jewelry artisans. This selling exhibition, co-curated by Grant—an acclaimed author and authority on jewelry (who literally wrote the book on high-end jewelry, Coveted: Art and Innovation in High Jewelry)—marks the first of its kind.

“The whole concept about the title and the history really talks about a Renaissance,” says Grant. “The ‘brilliant’ is a reference to brilliance in diamonds while also referencing the brilliance that is Black talent.”

Black artistry is having a—very long overdue—moment of shine, so this show is right on time. From Nia DaCosta’s smash hit Candyman breaking box office records in August to Deana Lawson’s historic Hugo Boss Prize show at the Guggenheim to Kerby Jean Raymond presenting on the official Haute Couture calendar this past season, the time for Black brilliance is now and Sotheby’s Director of Jewelry Frank Everett couldn’t agree more.

“This is the time,” Everett tells Grazia USA. “I guess Sotheby’s is really a little bit ahead, even though we shouldn’t be considered ahead of the curve, because it’s long overdue, but we’re happy to be the first.” He continues, “Someone should have done it a long time ago, but we’re glad that we’re finally doing it now.”

Everett’s co-curator, Grant, crafted the idea for this monumental show as her way to contribute to the collective unrest, protest, and social awakening in the aftermath of the murder of George Floyd on May 25, 2020.

“When everything happened with George Floyd and the Black Lives Matter movement,  I think all of us felt a bit powerless,” says Grant. “I thought, What can I do with my tiny bit of power? What can I do to make a difference? I’ve got to do something; I can’t just sit here and watch this.” And so, she pitched the idea of a selling exhibition centering the past, present, and future of Black jewelry artisans to Everett. His answer was a resounding “yes.”

“We said yes, honestly, within about 10 seconds—I mean, there was no thought to it,” says Everett. The result is a powerful comprehensive account of the history of Black artisans in the jewelry industry, a spotlight on major forces as well as emerging voices, and a marketplace for these brands to sell their work. This is a curatorial show, but at the same time it’s an auction. “We [at Sotheby’s] want these designers to sell jewelry,” says Everett. “We want to really promote their brands and to promote their business.”

When choosing the featured designers, Grant set off to curate an eclectic group, ranging from different time periods and embodying various stylistic approaches: from gothic pieces to minimal abstractionist and brutalist. She chose designers who were at different levels in their respective careers, and jewelers with different connections and backgrounds within artisanal jewelry making.

“Everyone’s so different in this, everyone’s got such a different sort of style,” she explains. “We’re really keen to show the individuality of people, to show there isn’t one place that Black artistic endeavor stems from: It’s multifaceted.”

Indeed, as a culture we don’t tend to define and box in what “white talent” looks like. It’s not monolithic. It’s French, Italian, American; it’s complex. Black talent should be granted the same richness of understanding. “I suppose in a sense, this exhibition, is showing the complexity that Black culture has. It’s not simply one note, it’s incredibly nuanced,” she says.

“I think the title of the exhibition says it all,” Lola Oladunjoye, founder of small-batch jewelry company Lola Fenhirst, tells Grazia USA. “How often do you see these adjectives used together? ‘Brilliant and Black’ is about taking up space, having a voice, and being recognized for what we bring to the table.”

Born and raised in London, Oladunjoye draws on her West African Yoruba heritage to craft striking, architectural pieces rooted in sustainably. Her Nigerian heritage takes form in the brand’s captivating ring on display in the exhibition, the Sybil Ring. The hybrid, 18k yellow gold/white gold ring, complete with brilliant-cut diamonds, takes inspiration from an ancient Greek tale while also nodding to her West African lineage through the integration of the bead—a traditional West African tribal motif—represented by the rounded scalloped forms.

For Oladunjoye, like many of her “Brilliant & Black” contemporaries, this exhibit is a chance to expand her platforms, take a crack at the proverbial glass ceiling within the luxury sector, and contribute to something far greater than themselves. Much like Grant’s initial spark for spearheading this show, Oladunjoye feels a sense of purpose in her participation. “In my opinion, nothing happens in a vacuum. There’s a continuum of social awareness at play and this show is a part of it,” she says.

Aside from the gorgeous gems and brilliant diamonds on display, this exhibition is about visibility and equity at large. “Black jewelers are a force to be reckoned with and are here to stay,” London-based artisan Jariet Oloyé tells Grazia USA.

“Brilliant & Black” not only highlights the stories and craftsmanship of contemporary Black jewelers, but also tells the history of jewelry design in America itself. The show calls attention to the work of two prolific pioneers of American jewelry design whose pieces anchor the show: Art Smith and his mentor, Winifred Mason Chenet.

Mason Chenet and her mentee Smith are often left out of the conversation as it pertains to American contemporary jewelry—something this exhibition aims to correct. Both came to prominence in the ’40s and ’50s, a time in which they were never given their just due. Speaking on Smith in particular, Grant says, “I think he was one of the founding fathers of American contemporary jewelry design.” She then goes on to say that Winifred Mason Chenet “was probably the first Black contemporary jewelry designer in America that we know about, who isn’t talked about remotely enough.”

Although the designers in the show come from different walks of life, different eras, and pull from various cultural points of reference, one commonality they all share is the influence their Black experience has on their work.  “I am a Black woman and based on that alone I see the world through my own distinct lens,” designer Maggi Simpkins tells Grazia USA. “I believe that my lived experience innately influences my aesthetic, the stories I tell and what I create.”

Her In Bloom ring, designed exclusively for the exhibition, is a rich 18k gold, pink diamond ring adorned with sapphires and rubies, which tells the story of “my sort of ‘coming of age’ as a designer, and allowing myself the permission to realize my greatness,” she says. “A permission to be unapologetically bold, a permission to bloom, blossom, expand, take up space, to step into my light.”

Designer Johnny Nelson, who’s designed custom pieces for Pyer Moss’s Collection 3, has three rings featured that all tell the story of Black America: a yellow-gold, red garnet ring adorned with the All The Power Fist; the LET FREEDOM RING, a gold Mount Rushmore-style four-finger ring; and (a personal fave) Her Freedom Ring, in the same four-finger style, which features the likenesses of civil rights leaders Harriet Tubman, Shirley Chisholm, Sojourner Truth, and Ida B. Wells.

“We live in a diverse world, and we should have as many voices, styles, designs, and stories as possible that are told through jewelry design,” Satta Matturi, founder of Matturi Fine Jewellery, tells Grazia USA. The “Brillant & Black” cohorts’ works represent a rich plethora of aesthetics: from the more classical, sculptural bespoke pieces of Ten Thousand Things to the powerful femininity of Thelma West’s work and the more conceptual work of Castro NYC, who often takes his vivid dreams and twists them into fantastical creations using exotic materiality. That’s not to overlook the geometrically focused works of Bermudian designer Melanie Eddy and the signature aesthetic of abstract lines and organic curves of Paris-based atelier ALMASIKA.

With this exhibition, both the curators—as well as the artists—are collectively starting a dialogue. “I hope this show brings more awareness of jewelry designers of color,” designer Jacqueline Rabun tells Grazia USA. “Brillant & Black” is game-changing. It rightfully places Black designers in the canon and highlights their brands on a major, global auction stage.

“Sotheby’s is a very important art and cultural institution, and we have a responsibility in the world, to advance underserved communities and to really think about the future, and we want to be part of that inclusive, equitable future,” says Everett. Grant adds, “I just hope that everyone either comes to see it, stops by, or looks at it on social and actually feels the beauty and the meaning in these pieces.”

“Ultimately, our gift, as a show, is to make you [the viewer] a part of our moment,” she passionately continues. “That moment is now, with this moment in history as Black creatives, and we want other people to also be part of that. It’s not just for us; it’s for everyone! And so, I hope that everyone can kind of get on the Soul Train and come with us.”

Grazia USA asked each designer participating in the show to share their definitive thoughts by asking, “Black jewelry is … Fill in the blank.” Their answers collectively showed the impact, significance, and importance of this show:

Angie Marei: “Black jewelry is no longer being kept in the shadows.”

Thelma West: “Black jewelry is adding even more spectacular colors to the world, on its way to reclaim its rightful place.”

Lola Fenhirst: “Black jewelry is as diverse as the Black experience itself.”

Maggi Simpkins: “Black jewelry is essential; it is our ancestral birthright.”

This article appeared on 24th September 2021.