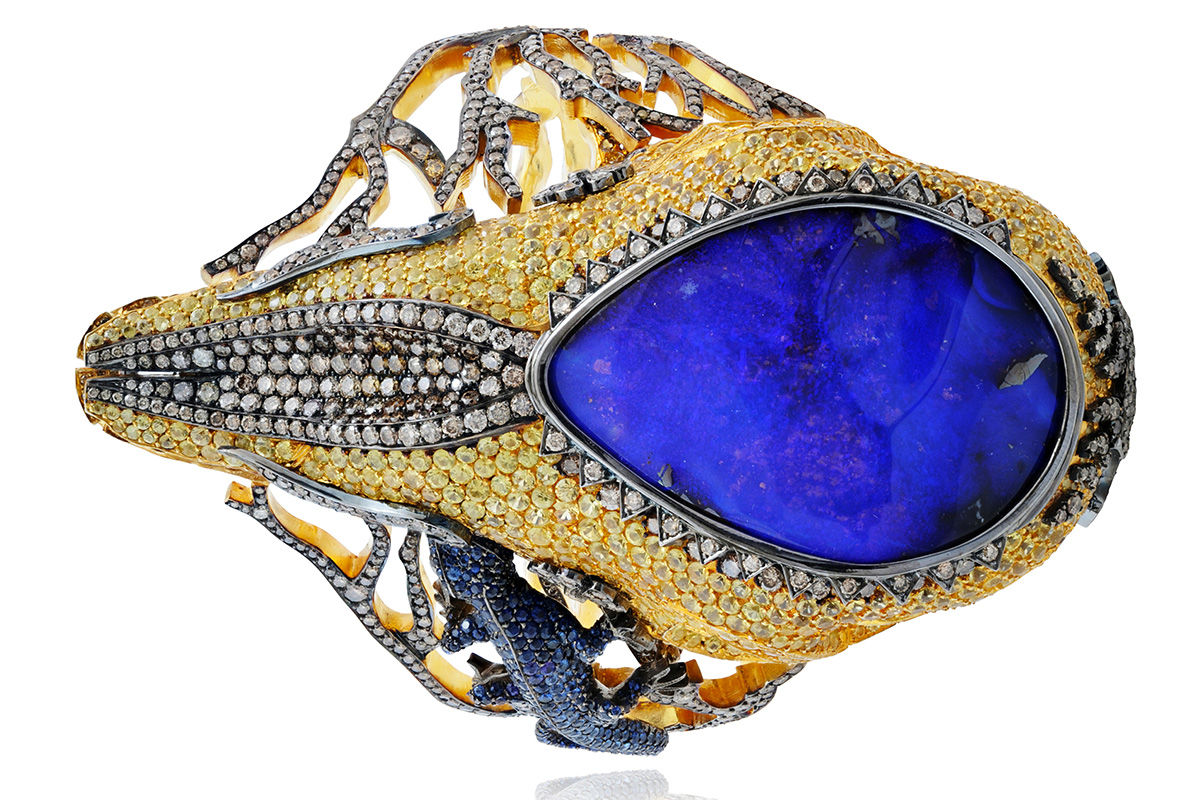 Jewels that are wearable works of art: 6 beautiful exhibitions around the world From Barcelona to New York passing through London to visit the most sparkling exhibitions that tell the relationship between jewelry, art and design

Have you ever wondered what it would be like to wear a work of art?

If you are thinking of a preciouS Bulgari necklace , Boucheron pendants or Cartier diamonds , you are out of the way. And we’re not even talking about decorating with a baroque setting for a gala evening. None of that. We are talking about wearable art, specifically created by artists, painters and sculptors. Works of art that become jewels, or vice versa: the difference is very subtle.

They are products developed from the same creative approach, with the same emotional power, the same artistic meaning. What changes is only the purpose: you don’t just look at them, you carry them with you. During the twentieth century, there have been many artists who have approached the creation of jewelry, ideally moved by an initial desire to pay homage to family, lovers, friends or loved ones.

Here is a list of the best glittering exhibits exploring this relationship, around the world.

The Victoria & Albert Museum in London will host an exceptional exhibition until next spring. Most people will have heard of Carl Fabergé, the Russian jeweler of the ill-fated Romanov family. What is less well known is that Fabergé opened a branch in London, the only one outside of Russia, which served aristocrats, inheritors, Maharajas and financiers.

The opening of the exhibition at the V&A showcases the riches produced by this iconic jewelery house, including some fine pieces made especially for the English market. The exhibition “Faberge in London: Romance to Revolution ” can be visited at the Victoria and Albert Museum in London until May 8, 2022.

Also in London, art and jewelry aficionados Melanie Grant and Elisabetta Cipriani are organizing their first exhibition, entitled Force of Nature , in collaboration with the Serpentine Gallery . It will be held at the Elisabetta Cipriani gallery in London, until November 27, and the public will be able to make an appointment to see and buy the jewels.

The goldsmith and sculptor Ruan Weng Mong is a mediator between different worlds: born in Taiwan and trained as a goldsmith in Germany, as well as having been president of the Goldsmiths’ Guild of Nuremberg for many years, he is at home on several continents. His works of art elegantly marry his sensitivity for materials and his appreciation for stones (gems) with clear shapes.

For the first time in Germany, the exhibition dedicated to the goldsmith, Exotic Formosa – Jewelery and Objects created by Ruan Weng Mong , will present around 100 of his works: jewelery, sculpture and graphic art, created over a period of over 40 years at Pforzheim Schmuckmuseum in Germany From 5 March to 6 June 2022.

The exhibition of artist jewelery at the Picasso museum in Barcelona has been extended until 9 January 2022 . From the drawings he made during his youth in Barcelona or Madrid, to the copper engravings during the last years of his life, jewels occupied a unique place in Pablo Picasso’s pictorial and graphic work.

Necklaces, brooches, brooches, bracelets and earrings are objects that have captured his attention or that he himself has imagined and represented in some portraits, where they are integrated as one with the subject, sometimes even putting it in shadow. Imagined or reproduced, the jewels reappeared as elements of a Picasso language which, starting from the 1930s, would become truly concrete. Picasso then began to shape dozens of pieces of surprising diversity for the people around him, whose existence is still quite unknown. A real window on the history of art in miniature.

Also in Barcelona, at the Museu del Disseny, until 30 November 2021, you can visit Women Jewelers 1965-1990: Between Art and Design, an exhibition of contemporary jewelry, a beautiful introduction to the works of women goldsmiths who lived in the second half of the twentieth century. played a decisive role in this revival. The exhibition shows their contribution and offers a varied collection of pieces that use new materials, inspired by the experimentation that was taking place in Europe, particularly in Germany.

The MAD Museum in New York has presented more than 150 art jewelry exhibits to date and there are more than 950 pieces in the Museum’s permanent collection. The exhibition, 45 Stories in Jewelry: 1947 to Now, highlights the contributions of the Museum of Arts and Design and advances in the industry, and contextualizes the daring experimental practices of its most compelling artists within key historical moments.

This article appeared on 24th November 2021.