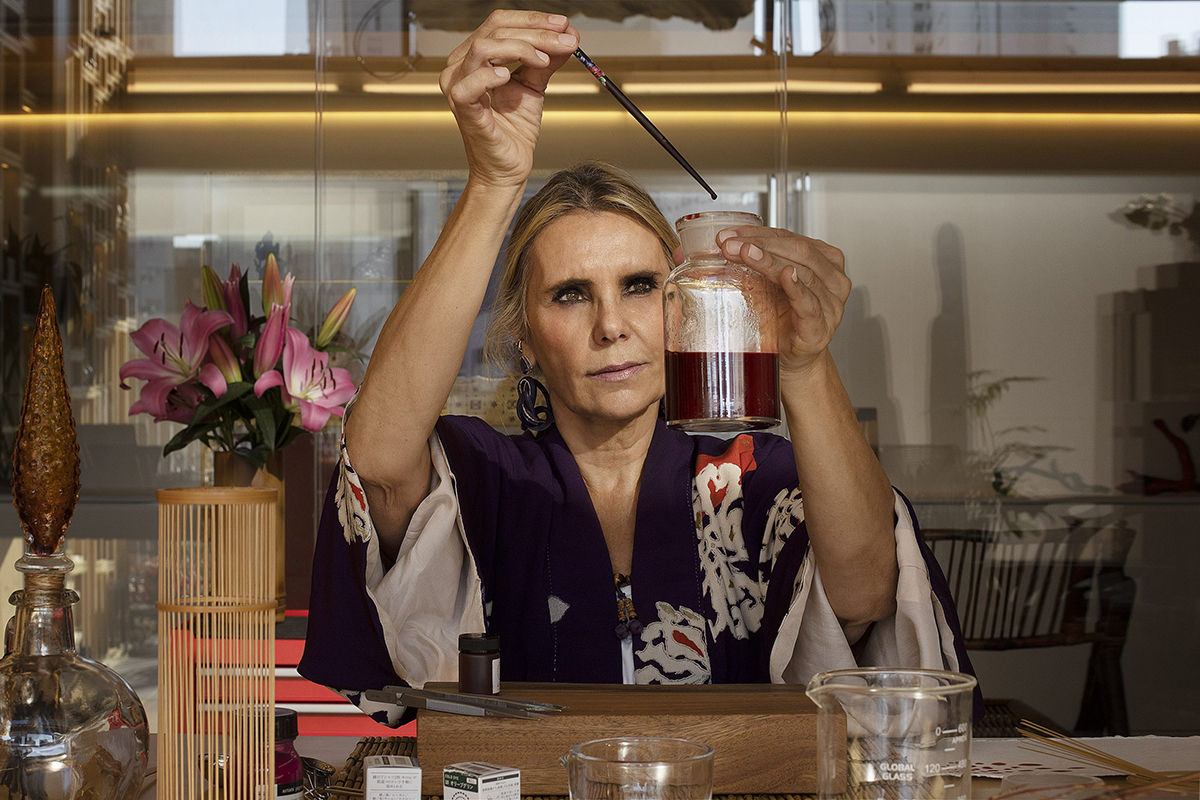 Following on from her first book Coveted: Art and Innovation in High Jewelry, Melanie Grant examines the evolution of jewellery as art with a new five-part series created during lockdown with some of jewellery’s modern masters for The Goldsmiths’ Company.  This is Part III.

From father to daughter

I became a jewellery designer during the Millennium in the year 2000 when the world entered a new era and so did I.   Until 1999 I owned a business creating costume jewellery where I combined Brazilian stones such as Citrine and Amethyst with plated metal but I decided to make the leap to real gold and took a workshop on the material which proved to be a turning point for me.  I was thirty years old and I’d just had my first child.  While watching the molten metal bubble and blister under fire, the memory of my father Salvator Longobardi (who died when I was seventeen) flashed through my mind.  He had been a goldsmith and operated out of a small atelier in our house.

He would often work from dawn ‘til dusk, executing meticulous commissions with his huge hands, this big tall man and I absorbed it all.  My father was the ninth son of ten children and grew up in Rome where his obsession with gold flowed through the family veins.  His grandfather had also been a goldsmith, creating precious objects for the Vatican and the importance of craftsmanship was never far from conversation around the dinner table.  I learned to cherish the detail of how things were made, to balance the right mix of stones and metal and later unorthodox materials such as bamboo, wood, bone and shell.  I discovered my own love for jewellery and it went deep.

I create 200 – 300 pieces a year and sometimes I look back at my journey with wonder because it feels surreal.  I have ideas flowing through my mind at all times which echo the digital reality we now find ourselves in.  The power of Instagram continues to work it’s magic and connect us with a huge number of potential clients and while Covid-19 has affected my business, it has given us the time to build a new atelier complete with workshop on-site at home in Brazil, to publish a book and to see fewer people in a more intimate way.  2020 was a crazy year but there were real opportunities to rethink how we talk about who we are.

Creatively I communicate with alternative materials mixed with precious stones and metals and after twenty years I have to say that bamboo has been the hardest of all to work in.  I’ve been to Japan many times which is where I fell in love with bamboo. The skill required to transform it into an object is a thing of beauty, which filters down through the generations.  Whole families work in the craft of bamboo and I witnessed this first hand recently when I went to a village called Beppu In the South.  They even have a museum dedicated to bamboo basketry called The Beppu City Traditional Bamboo Crafts Center.

The patience it takes to plant the bamboo, wait for it to grow, dry it out, then cut it into minute slices and treat it is extraordinary.  It’s tough but flexible and if you don’t respect the bamboo fibre it will simply break and of course I tried to make something with it.  I even stayed at the home of an artist in Beppu for an entire week in my attempt to bend it to my steely will but I found it impossible.

She as a specialist has dominated the craft for thirty years and when I tried to take what I had learnt back to Brazil, the artisans just couldn’t do it.  They managed a few simple things but the complexity employed by the Japanese was beyond them.  In the end we formed a partnership with artists from Japan and out of that flowed a bamboo inspired collection.  The artists created the pieces there but someday I’d love to persuade them to do a workshop in Brazil to share their secret techniques of how to bend and treat the bamboo.

Many of the bamboo artisans are women but female involvement on the technical side differs from country to country.  When I went to India three years ago to attend the miniature painting school in Jaipur, I noticed only men were there so I asked where the women were? They said that in their culture only men do this type of work and then I began to notice how common this was in other places I visited.  Even in Brazil, when I go to the Amazon in the north of the country to commission the highly technical wooden marquetry I have in some of my collections, this is done mostly by men.

So there is an issue there I have noticed recently.  The men are very skillful but in my view a woman’s hands are more delicate and there is something about women making for other women I like, you know.  I think women create naturally.  If we can create a child we can create a piece of jewellery but men have to learn what for us it is a natural process.  I’ve never encountered any disadvantage as a woman in this business and I count myself lucky in that regard.

I think the craft exists to become a piece of art but it depends on who is making the piece. I see craft as a result of the creative process that I inject into the art form that is jewellery.  Craft is artisanal and when you combine it with materials and there is courage involved, it transforms the object.  Art is the mixture of craft and materials.  The market in Brazil is a mixture of big brands such as HStern and small independents that experiment more with creativity.  It is a tale of two worlds but both offer something of value.

I learn a lot about craftsmanship on my travels.  In 2016 I went on a 40-day pilgrimage to India after being enchanted by a series of miniature Rajasthani paintings at the Metropolitan Museum of Art in New York.  I visited the art school of Udaipur and arrived to find artisans working with natural pigments taken from crushed gemstones.  First they ground Lapis Lazuli or Malachite and then they mixed the powder with a transparent lacquer.  With the most minute of brushes made from the eyelashes of a camel, they would paint using a single lash to create the most exquisite detail.  I was fascinated.

I started to work with them and through them I discovered Indian culture.  That was five years ago and we have exchanged a huge amount of knowledge.  The scenes painted onto jewels are not only Indian but also Brazilian and my Amazonia bamboo collection includes miniature paintings of tropical Amazon rainforests, which was an especially rewarding moment for me.  The level of detail that can be communicated in a miniature painting is profound and if you look carefully through a magnifying glass there are elements that reveal themselves only on closer inspection.  With a ‘canvas’ of only two centimetres this is a stunning achievement. I asked painters at home in Brazil to try this level of intricacy but again this level of skill must be passed down through the generations.

My interest and passion really is in the detail.  I want to learn the technique, to perfect it, for the finish to be perfect.  That’s where the true pleasure lies in jewellery for me.  I never think about how much something will cost or how much I can sell it for.  I just create and that process of mastering the detail is where I find the most joy.  I simply don’t have space for anything else.

Stones are most precious to me in service to the design and I look for harmony across all elements.  Some of the stones I use have a high intrinsic value but that is never the point or main focus.  If I need a green stone for example, I don’t add an emerald gratuitously.  Instead I may go for a tourmaline for its tone and texture because harmony wins every time.

The ancient ways are sometimes the best

Historically I admire the artisans of Ancient Egypt and I recently went to the Cairo Museum to see Tutankhamen’s jewellery, which was simply extraordinary!  I experienced the undeniable power of craftsmanship, how each stone was cut and integrated into a bigger vision.  I intend to fashion a future collection inspired by my trip.  The Egyptians were so visual and pictorial with everything imbued with meaning, communicating the story of their history.

These ancient cultures can teach us so much.  Japan also has a very pure vision connected to craftsmanship, having been in isolation for the most part until the 19th century. They are still masters in lacquer-ware and bamboo weaving in a world of instant gratification.  Investing that amount of time into extreme detail with a process of 100 steps, all of which must be followed perfectly results in a type of poetry.  That makes Japan for me the most wonderful example of modern day craftsmanship.

Ultimately you have to love what you do.  To have a passion that moves and drives you combined with lots and lots of patience.  That, over the centuries, hasn’t changed at all.  You can’t get disappointed when the outside world doesn’t approve or understand what you are doing.  It is enough for you to love it.  I’m always in search of something new, something novel, something different but it’s hard nowadays to create something from nothing.  Everything is so open, so accessible that your vision can get contaminated by seeing other people’s work online.  The hardest thing in the world is to create a jewel that doesn’t resemble anything else.

Technology does have its uses though.  We use laser-cutting machines but we also like to make things by hand which takes much more time but is satisfying.  A mixture of old and new, of technology and more ancient craftsmanship feels right. I’m currently researching my new collection involving Egyptian papyrus, a type of fibrous slice cut from the palm tree that ancient Egyptians used as scrolls to write on similar to parchment.  I’m testing its validity as a material for the purpose of jewellery as I find it beautiful and challenging and I plan to paint miniature scenes on it because this is what I like to do.  To mix the old and new, techniques and technology and hopefully this summer I’ll be crossing another frontier.

Written by Melanie Grant for The Goldsmiths’ Company, 3rd Oct 2021.